Won't You Come Out Tonight? 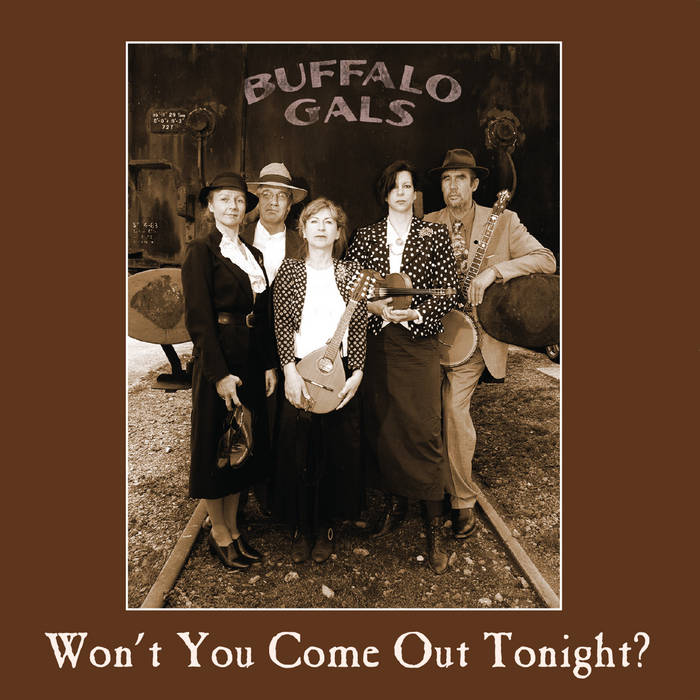 This music was recorded live in an attempt to capture on CD some of their favorite performance tunes and songs.
Recorded live at Back Ground Cottage, Frome, April, 2005.
Produced and engineered by Leon Hunt and Josh Clark.

1. Cumberland Gap (Trad, arr. Buffalo Gals)
A well known fiddle tune throughout the Appalachians, which was first recorded commercially by Riley Puckett and Gid Tanner in 1924. This version comes from Dave Bing of Harmony, West Virgina. The tune celebrates the mountain pass that served as the first avenue for settlers to the regions west of the Appalacians. In its heyday, between 1775 and 1810, up to 300’000 people crossed the gap, travelling from Tennessee into Kentucky.
Vocals: Lead – Kate, Harmony – Pete and Sue

2. The Southern Whoopie Song (Trad. Arr. Buffalo Gals)
This was learned from a recording of the Anglin Brothers made in the 1930s. Red, Jim and Jack Anglin, from Alabama, were one of the many brother harmony acts which sprang up during that decade. They probably learned this piece from guitarist and Grand Ol’ Opry star Sam McGee, who called it “Railroad Blues”, although the words Sam sang on his recording were quite different. A collection of Anglin Brothers’ recordings made for ARC between 1937 and 1938 can be found on a reissue by John Morris on the Old Homestead label.
Vocals: Lead – Pete, Harmony – Kate, Sue, Sibylle, Intro-Johnny

3. Polecat Blues (Trad.)
Benton Flippin of Surry County, North Carolina is our source for this tune, although it is earlier attributed to Georgia fiddler Tommy Magness (1911-1972). Benton, born in 1920, has worked throughout his life as a radio performer and string band musician. His outstanding style, while solidly within the tradition of his area, is uniquely his own, with a rare originality of syncopation, phrasing and drive. Sibylle provides percussive flatfoot dancing accompaniment.

4.In My Time of Dying (Trad.)
Our version of this song has largely been influenced by the close harmony singing of siblings Beth and April Stevens, whose bluesy performance of the gospel number was inspired by Led Zeppelin’s rendition on Physical Graffiti. Jimmy Page cites gospel blues singer Josh White’s 1933 recording of the song White called “Jesus Gonna Make Up My Dying Bed” as the inspiration for Led Zeppelin’s version, though the first recorded version, made a few years before White’s, is a dark and haunting rendition by Blind Willie Johnson.
Vocals: Lead – Sue, Harmony – Johnny, Kate, Pete, Sibylle

5. Reuben (Trad. Arr. Buffalo Gals)
One of our favorite train tunes, whose extended family includes fiddle tune Train 45 and the song 900 Miles. The song is found in Frank Warner’s Traditional American Folk Songs with notation by North Carolina banjo player frank Proffitt, who described it as “one of the oldest simple banjo tunes…it was the first tune generally learned…There are about fifty different verses to this, as everybody added them all along” [Warner].
Vocals: Lead – Kate, Harmony – Pete, Sue

6. Johnson Boys (Trad. Arr. Kate Lissauer)
This song, popular with Southern troops during the War Between the States, praises the Johnson brothers and celebrates their prowess as soldiers for the Southern States. Northern troops later began to satirise it, and a well known comic version sprang up, poking fun at the brothers’ supposed awkwardness:

“Johnson boys raised in the ashes
Don’t know how to court their maids
Turn their heads and hide their faces
The sight of a pretty girl makes them afraid.”

This version combines two fiddle versions of the tune, one for the singing based on an old mountain dance tune, and another for the instrumental which is based loosely on an Irish version of the fiddle tune.
Vocals: Lead – Kate, Harmony – Sibylle, Sue

7. Sally Anne (Trad. Arr. Morris Brothers)
This is a tribute to the Morris Brothers of Central West Virginia, who made a hit of it in the 1960s. Dwight Diller tells us that at that time, when the track was played on the jukebox, fights would regularly break out. We can only dream of having the same effect on our audience. The Morris Brothers were one of the great West Virginia string bands of their time, and their version of Sally Anne wrapped around Skillet Good and Greasy is one of Kate’s favorite string band performances. She has fulfilled her lifelong ambition to perform it with a band and has blatantly copied the arrangement, with gratitude and apology to the surviving Morris Brothers, John and David Morris and Dwight Diller.
Vocals: Lead-Kate, Harmony – Pete, Sibylle, Sue

8. Talking Blues (L. Cogil, C. Barrett)
This song, written by Carlton Barrett, was originally performed and recorded by Bob Marley. It inspired a string band rendition by Tara Nevins on her Mule to Ride CD, from which we first learned it.
Vocals: Duet – Pete and Sue, Harmony – Kate

9. Elzic’s Farewell (Trad.)
Both Wilson Douglas and French Carpenter, late of West Virginia, have helped to make this tune known to today’s fiddlers. It is said to have been written in the late 1800’s by a Harvey Elswick of Kanawha County, for his mother on her deathbed. It can now be heard with numerous variants of the low parts, and often played as a very upbeat tune. We use it as a dance performance tune, as it is one of Sibylle’s favorites.

11. Angels (Luther G. Presley)
We learned this from the wonderful arrangement of Lookin’ Toward Heaven recorded in 1962 by Fred Price, Clint Howard and Doc Watson. According to Ralph Rinzler’s notes to the recording, (Smithsonian Folkways SF40029/30), Howard and Watson both recalled hearing the song in church, and it can be found in the hymnal Heaven’s Banner (Stamps-Baxter Music, 1955)
Vocals: Lead – Kate, Harmony – Kate, Sibylle, Sue

12. Buffalo Gals (Trad. Arr. Buffalo Gals)
This widely known old-time breakdown and dance tune from Georgia and Alabama is also known by the titles Alabama Gals, Roundtown Gals, or gals from any of a number of other locations, depending upon the predilection of the player. In keeping with its universality as a tune, we have included the international flavor of multiple Buffalo Gals accents in the singing.
Vocals: Johnny, Kate, Pete, Sibylle, Sue, Tim