Won't Get Trouble In Mind 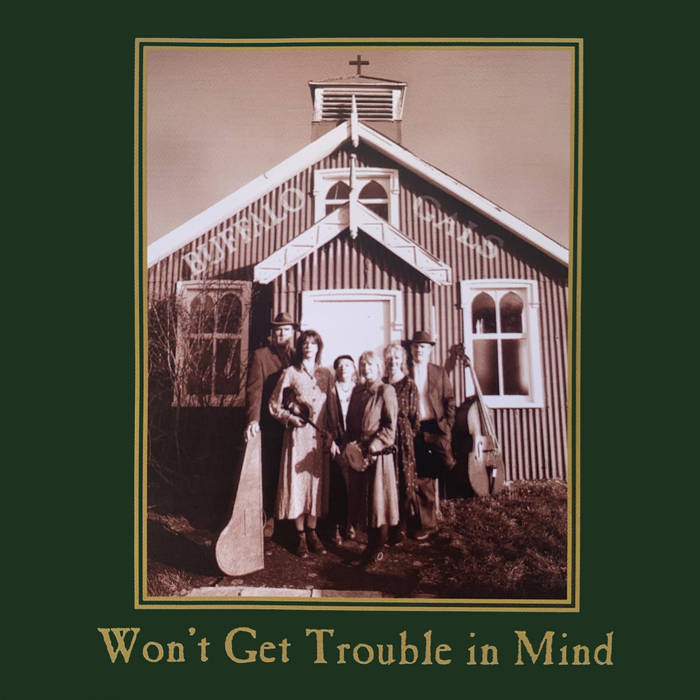 Produced and engineered by Josh Clark, Get Real Records
Recorded at West Lodge, Frome – May 2008

1. Big Scioty (Trad, arr. Buffalo Gals, lyrics by Richie Stearns)
The 231-mile-long Scioto river, which runs through Ohio and empties into the mighty Ohio River, was home to several Native American cultures, which may account for the sound of its name.

This tune is well known among West Virginia fiddlers, and many of them name Burl Hammonds as their first source. Burl’s playing showed a great deal of variation as to how many times he played certain phrases, but we’ve kept it straight here. Pete brought us the lyrics as written and sung by Richie Stearns.
Vocals: Pete, Kate, Sue

2. Squirrel Hunters (Trad.)
We learned this tune from our banjo playing friend Bob Chase. It is found in the Samuel P. Bayard Collection, Dance to the Fiddle, March to the Fife. It is known as a fife stop-beat piece, referring to the manner in which accompanying drums will stop playing for a period of time within the tune.

When Cincinnati, Ohio was threatened by Confederate forces during the War Between the States, its governor called for volunteer reinforcements to come to its defense. 15,000 men turned up, and the Confederates retreated upon learning the size of their opposition. These volunteers were nicknamed the Squirrel Hunters.

3. Daddy’s Little Lulu (Sue Clare)
This song was born of a rare condition from which Sue Clare suffers, known as OCD (Obsessive Carter Disorder). Inspired initially by Maybelle Carter’s style, she wrote it for the British Songwriting Festival, and it was nominated there for Best Song, 2006.
Vocals: Sue, Kate, Pete

4. Crawdad (Trad, arr. K. Lissauer)
Kate was inspired by a rendition of this great old folk standard sung and played by Doc Watson, Clarence Ashley and fiddling Fred Price in their Folkways recording, Old Time Music at Clarence Ashley’s Vol. 2. There are numerous variations, such as “Sugar Babe”, “Sweet Thing”, “This Morning, This Evening, So Soon”, and the Round Peak “Policeman”, as sung by Tommy Jarrell. As a member of a large extended family of songs, it is difficult to pin Crawdad’s origins, but the earliest written version known to us is of the piano rag “Baby Mine”, composed by George Botsford, and published in 1913. Cecil Sharp, in his 1917 English Folk Songs from the Southern Appalachians, lists both Sugar Babe and The Crow-Fish Man, which his informant learned from an African-American singer.
Vocals: Kate, Sue, Pete, Sibs

5. Farewell Trion (Trad.)
The source known for this tune is fiddler Mack Blalock (1914-1987), from Mentone Alabama. He reported that his uncle Joe Blalock made the tune up after being laid off from a mill in Trion, Georgia. We learned the tune from the fiddling of James Bryan, who has added a third part to the original tune.

6. Great Atomic Power (Ira Louvin, Charles Louvin, Buddy Bain)
Also from Alabama, Ira and Charlie Loudermilk, who later changed their name to Louvin for show-business purposes, became a great iconic country music act. They first performed as The Radio Twins in 1942, and continued performing and recording as a duo until 1963. Great Atomic Power was recorded in 1952, when they were beginning to enjoy their greatest recording success.

According to Charles K. Wolfe’s biography of The Louvin Brothers, In Close Harmony, Charlie Louvin recalled that co-writer Buddy Bain was responsible for the theme of this song: “The song was his idea, something he came up with after they dropped the big one. Buddy was trying to write it and he wasn’t too lucky in getting the song to say what he wanted it to say. Ira took his title and his notes he had and finished the song for him.”
Vocals: Kate, Sue, Pete, Sibs, Johnny

7. Cindy (Trad. Arr. K. Lissauer)
This is a tune known in some form by most US fiddlers, and by many people as a children’s song. It was part of the repertoire of morning songs that Kate’s class sang in grade school, a real old favourite that appears in countless forms. The tune of this one is based on a version played by Tommy Jarrell that he called Rockingham Cindy.
Vocals: Kate, Sue, Pete, Sibs

8. Cattle in the Cane (Trad.)
This tune is based on a melody recorded by Texan M.J. Bonner, born in 1847, who recorded the tune in the 1920s. Kate learned it from Gerry Milnes, who got his version from the Wirt County, West Virginia fiddler Glen Smith.

9. Jealous Hearted Me (Trad.)
We like to amuse ourselves by pretending that with this song we have discovered the earliest example of rock-and-roll.

This song was recorded in 1924 by Ma Rainey, as a full-blown blues called Jealous Hearted Blues. It later became the theme song of comedienne and Grand Old Opry star Minnie Pearl. Our version comes from a Carter Family recording made in 1936.
Vocals: Sue, Kate, Sibs

10. Peg and Awl, Old Grey Mare (Trad, arr. Buffalo Gals; Trad.)
Peg and Awl was first recorded by the Carolina Tar Heels in 1928. The song refers either to the peggin’ awl, an awl specifically designed to create a circular hole in leather, or to the wooden pegs which were once used to fasten the soles and heels of shoes. Or both!

Several types of machines invented or developed in the mid- to late nineteenth century, including the rolling machine, the sewing machine and the lasting machine, served to replace the hand tools used in the shoemaker’s trade, .
Kate got Old Grey Mare from West Virginia master fiddler Dave Bing. The words come form various sources, but it’s another one she remembers in nursery rhyme form from her school days.
Vocals: Sue, Kate

11. John Henry (Trad. arr. K. Lissauer)
So many versions exist of this ballad of the iconic American strong man, that it’s impossible to attribute it to any one source. It is believed that John Henry worked for the C & O Railroad, pounding holes into rockface for blasting.

Kate’s melody is based on a recording made of an unaccompanied singer at Parchman Farm Penitentiary in Mississippi by Alan Lomax in the late 1940s, from which some of the verses also derive.
Vocals: Kate, Sue, Pete, Sibs

12. Trouble on my Mind (Trad, Richard M. Jones)
The words are those of a jazz standard originally written by Richard M. Jones in the early years of the 20th century. It has been covered by a huge range of jazz, blues, rock and country performers, but it appears here to the completely different melody of a fiddle tune from John Morgan Salyer.

John Salyer (1882-1952), was one of the last great traditional fiddlers of Eastern Kentucky. Although he turned down the commercial offers of record company scouts, we are fortunate that his family recorded many of his wonderful tunes.
Vocals: Kate, Sue, Pete

13. Hell Up Coal Holler (Trad.)
This comes from a rendition of a Henry Reed tune played by Alan Jabbour. Reed, born in Monroe County, West Virginia in 1884, was part of a musical family and a broad musical community. Although he never recorded commercially, folklorist and fiddler Jabbour recorded him in 1996-97, when Reed was in his eighties.

14. Save It (Jimmy Martin)
Jimmy Martin, (1927-2005), from Sneedville, Tennessee, was one of the kings of Bluegrass singing. He played guitar and sang in Bill Monroe’s band for several years and became one of the most important members of Monroe’s Blue Grass Boys. Before starting his own band, the Sunny Mountain Boys, he teamed up with the Osborne Brothers, with whom he recorded Save It! Save It! in 1954.
Vocals: Kate, Sue, Pete, Sibs