Won't You be Cruel to be Kind? 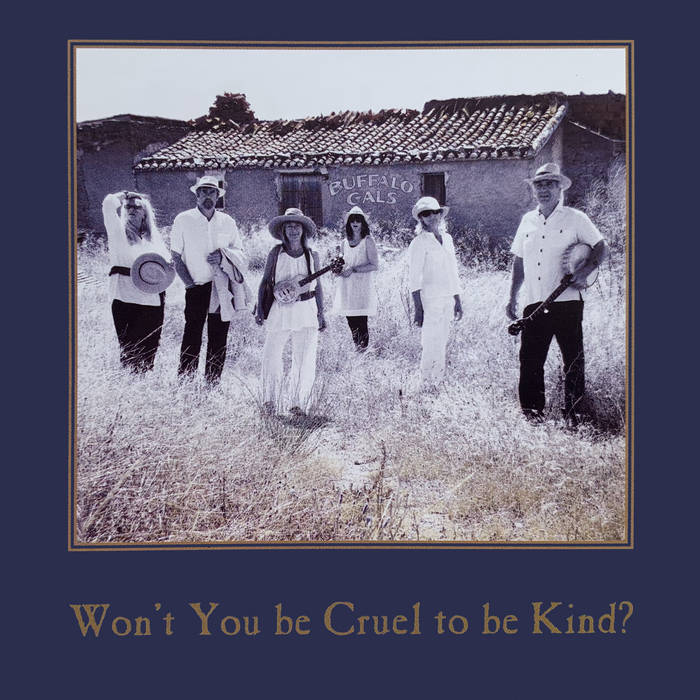 For their third recorded work, Buffalo Gals have compiled a wonderfully varied selection of their favourite tunes and songs, – a collection of offerings from old-time country music, including music of Appalachia, blues, love songs, dance numbers, spirituals, and new songs inspired by this great tradition. It’s punctuated with stunning percussive step-dance and all delivered with the Buffalo Gals’ trademark passion and flair.

An old time version of a 1893 classic written by Raymond Moore. The original tune had words written by Cy Warman, and appears in the film Life with Father (1947), sung by Irene Dunne. It entered the southern Appalachian folk tradition as a tune without words and became rather crooked.

We’ve altered the title and the first verse to more accurately represent our imagined prison break, but apart from that, this comes straight from the Sweet Brothers and Ernest Stoneman’s ‘I Got a Bulldog’. Ernest “Pop” Stoneman (1893 –1968), of Carroll County Virginia, was one of the pioneers of country music in its recorded form.

After meeting Herbert and Earl Sweet of Damascus, Virginia, at a 1928 fiddlers’ contest, Ernest recruited them to play fiddle and guitar with him for four days of sessions. These recordings also included Ernest’s cousin George Stoneman on banjo, and George’s son Willie Stoneman, singing. (Ivan M. Tribe, The Stonemans)

Our chief songwriter, Soozie Clare, came up with this one. She was going through another OCD phase of listening to the wonderful singing of Memphis Minnie and decided she wanted to write a ‘walking blues’. Further inspiration came from reading about the antics of Henry (Scrapper) Blackwell who was at one stage in his life a wandering minstrel. He was known to his friends as “whisky man” and he wrote “No good Woman Blues.” Sooz tried to imagine what it would be like to be the girlfriend of the kind of man who epitomised the joke “What do you call a musician without a girlfriend? – Homeless.” Guess you could say it’s autobiographical!
4. Jerusalem Ridge 3:25 (Bill Monroe)

Kate has been a fan of this Bill Monroe tune since hearing a recording of Kenny Baker’s definitive version, as he used to play it when he was fiddling for Bill Monroe’s band. A great tune inspired by the dorian modal sound that Monroe was fond of, and maybe even some eastern European influence?

Monroe’s beloved boyhood home was on a farm named for the nearby “Jerusalem Ridge”, which he called “the most beautiful place in the world”. From the ridge, Bill used to sit with his father listening to tales of the old days, and hear the fox hounds running or the sound of his Uncle Pen’s fiddle from down below. (Monroe Bluegrass Music Foundation, The Jerusalem Ridge Festival)

This sad account of unrequited love was left to us by sisters Mary Jane and Carolyn Dezurik. They came from a musical farming family in Minnesota, and began making a name for themselves as a musical act in the 1930s, through entering amateur stage contests. Inspired by their rural upbringing, their unique sound was based on unique vocalisations and yodels imitating animals and the sounds of nature, which were worked into their great duet singing.

They became stars of stage, radio, and film, and recorded this number for the Vocalion record label in 1938.

Johnny was working on a finger-picking version of the melody for this song, and persuaded Sue to learn to sing it. Its author is unknown, but the song has been one of the most popular of American hymns since the 1930s when it was widely sung by congregations at gospel conventions and religious rallies. It has been recorded by many great musicians, including Rosetta Tharpe and Elvis Presley. We turned to Patsy Cline for one of the finest of inspirational performances.

One of Kate’s favourite fiddlers, whose tunes crop up in all of her recordings, is the late master fiddler from north eastern Kentucky, Buddy Thomas. This lively and unusual tune appears on his only commercially recorded work, Kitty Puss.

Many more of Thomas’s tunes are now available courtesy of the Field Recorder’s Collective, a project which aims to preserve and disseminate recordings from private field collections, and to make proceeds from their sales available to surviving musicians or to their families.

The tune comes from fiddle and banjo player Burl Hammons (1908-1993), of the Hammons Family from central West Virginia, who are revered for the beauty, depth and originality of their music.

The tune has been carrying around a few traditional verses, and we have added a couple based on a contest we held amongst ourselves during our recording session. The arrangement is inspired by Emily Poole of the Gollywhoppers’ performance at La Fuente de Musica workshop in Spain.

We are fortunate that our own Soozie Clare has decided to write more songs in the Buffalo Gals vein. This one is a taste of philosophy, combined with Sooz’s interest in the old-time habit of stacking simple harmonies into a nice choral package.

Apart from it being a great song, we had to include this one, because we needed a title starting with the correct word!

For many fiddlers the source of this tune is either Edden (1874-1955) or Burl (1905-1992) Hammons, members of a central West Virgina family of masters of old-time music revered among lovers of the tradition for their interpretations of old tunes and ballads, and for producing a wealth of hauntingly beautiful tunes. Our version is influenced by both of their ways of playing it.

There is a falls called Sandstone Falls on the New River, which runs out of North Carolina into West Virginia. Dwight Diller tells us that its old name was Richmond Falls. Some people think the tune is in honour of those falls, and some think that it commemorates the fall of Richmond Virginia in the War Between the States.

This is not one of Hank’s best known songs, but must be one of his most beautifully forlorn. One of the greatest of the US’s songwriters and performers of country music, Hank Williams created all of his great work between 1947 and his early death in 1953.

The duets of the Louvin Brothers, who performed and recorded during the 40s, 50s and 60s, are among the most beautiful and influential in the country music repertoire. They were pioneers of the close harmony duet sound that has been so important throughout popular music. This song has become part of the general Bluegrass repertoire, and Pete has made it extra special with his angelic high harmony.

Johnny introduced these two tunes to us. The first is one of many different tunes, found in Ireland, England, and the US, remembering Paddy or Patty, over from the old country to work on the roads. This one is from Lee Hammons (1884-1980), although Johnny learned it from Dwight Diller.
This version of Shady Grove is different from those most commonly played, but you can still hear the tune of the old English ballad, Matty Groves, upon which all versions of Shady Grove are based.

Matty Groves, which can be found in Francis Child’s collection as #81, “Little Musgrave and Lady Bernard”, tells a terrible story of betrayal and violent revenge, whereas those who sing Shady Grove are usually singing a song that, although dealing with unrequited love, is fundamentally much lighter and more cheerful.

Kate’s all-time favourite cowgirl number has finally hit the Buffalo Gals’ stage. This multi-faceted delight comes courtesy of Patsy Montana (1908-1996). She first achieved fame in the 1930s as a member of Chicago’s radio WSL National Barn Dance, and is thought to have been the first million-selling female country artist, with her “I Want to Be a Cowboy’s Sweetheart”. Her yodel, which has inspired many female country singers since, was one of her trademarks.

Kate got this old-time gospel number from Dave and Tim Bing, who she overheard singing it with Jimmy Martin in their hotel room on one night of a tour. Dave says that when he was first getting into old-time music, he spent a lot of time with his paternal great uncles, listening to their music. This was one that his great uncle Kay sang. It has become the song Buffalo Gals uses to create band unity before performances.